Oculist’s stamp, Roman, 400 BCE-400 CE, excavated from the bed of the Moselle river in Trier, Germany on 22 November 1875. Science Museum, London, Accession number: A629428. The inscriptions on each side give us the name of the oculist, “Eugenius”, and the preparation’s name and use. “Chloron” is a green salve used for eye complaints and was made from egg whites. “Diarhodon” was used to treat inflammation. © The Board of Trustees of the Science Museum

The ancient town of Schwarzenacker lay within the Roman region of Gallia, near(ish) the city of Trier, formerly Augusta Trevorum. The town was founded between 52-58 AD and  destroyed in 275 AD by Germanic tribes who quickly abandoned the site, leaving it in relative isolation. In one house, which can be seen reconstructed in the image here, lived a certain Sextus Ajacius Launus. Medical instruments found on site suggest that the building was used for surgical or medical practices, but the instruments themselves, such as scalpels, forceps, probes and spatulas are fairly generic. Also found at the site was a square stone stamp, engraved on four sides, and a cake of medicament, identifying the individual as an eye doctor or Ophthalmologist.

Collyrium (plural collyria) is the Latin name for a medicament used in the treatment of eye conditions. From classical times, this eye ointment was dispensed in semi-solid sticks – presumably so they could be easily distributed and administered. Before they hardened, each stick was stamped by a seal. At some point before 275 AD, the cake of collyrium pictured below was stamped with an oculist seal, which was also found at the site. The collyrium and the seal both name Sextus Ajacius Launus, whom we now know to be an ophthalmologist by profession. 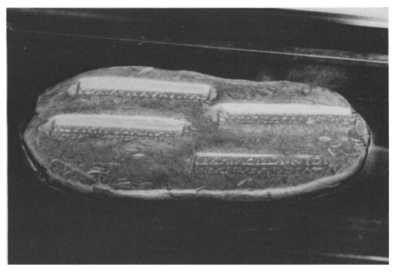 [Etymological note: the journey of the latin word collyrium is a rather interesting one. It derives from the ancient Greek Kollyra meaning a roll of coarse bread. Its diminutive, kollyrion, then appears to have been used to signify a poultice (as often bread was used) and ended up as an eye-salve, becoming collyrium upon transliteration into the roman alphabet. Thus Trevor-Roper calls them ‘little lozenge-shaped loaves’.]

At the site of La Favourite in Lyon another collection of Ophthalmologist’s tools was found dated to late 2nd century/early 3rd century AD. The collection included a brass sheet box containing twenty dried collyria pieces, shown mounted upon a board and three brass instruments, similar to those found in the house of Sextus Ajacius Launus.

Nearly 300 stamps have been found across Roman Gaul, Germanic and Britain, most with archaeological context. It’s no secret that eye diseases were a common ailment during the Roman period, especially in military camps, due to poor hygiene and long dusty marches. Indeed, a tablet found at Vindolanda in Britain records the net number of the First Cohort of Tungarians. Of the 31 were listed as unfit for service, 10 were suffering from eye trouble, ‘lippitendes’. An eye patch was also found at the site.

Ophthalmologists’ or ‘oculists” stamps were usually made of a hard stone such as steatite, shale or serpentine and were predominantly square or rectangular. The four narrow faces around the edge are usually engraved with the name of the eye doctor who made the specific medicament, the basic ingredients, the eye-condition targeted and instructions for use.  Inscriptions are inverse and retrograde, i.e. back to front, allowing the instructions to be read correctly after being stamped. The quality of the letters and spelling varies, but inscriptions tend to use multiple abbreviations and technical language. 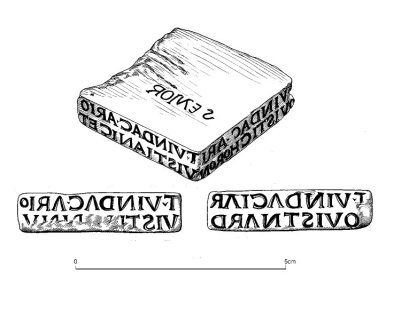 This seal was found in Kenchester in Britain and belonged to a certain T/F Vindex Ariovistus. It can now be found in the collections of the British Museum, accession number 1931,0211.1. SENIOR is engraved on one face, SEN on the other. The inscriptions around the edge refer to four different medicaments.

The Anicetum of F. Vindex Ariovistus. Anicetum is composed of red copper, henbane, hemlock, spikenard and frankincense. The word derives from the greek for ‘unconquered’, ανίκητος, perhaps intended to instil confidence in the patient!

The frankincense collyrium of T. Vindex Ariovistus. Turinum is recorded on three other extant stamps and was made up principally of frankincense.

Other stamps label medicaments for ‘clearness of vision’, ‘inflammation of the eye’, ‘dimness or blindness’ or ‘pain of the eye’. Many instruct the medicine to be taken in drops, or ex ovo, mixed with an egg.

The stamps’ main function were to label collyria sticks. While identification of the collyria must have been essential for their distribution, the emphasis placed on the name of the ophthalmologist within the inscriptions also suggests the importance given to their reputation. The stamps serve to mark the medicaments as the property of the practitioner. There’s no evidence to suggest that ophthalmologist’s protected their recipes from being reused by others, but the stamps suggest some level of ‘property marking’. The use of abbreviations and technical language mean that the information on the stamp would not be accessible to untrained patients. Perhaps the collyria would have been made in larger towns by ophthalmologists and distributed by smaller practitioners or dealers between smaller towns.

Ellerhorst and Cibis, (1986) Roman Ophthalmology. A Glimpse of Our Distant Past, Survey of Ophthalmology vol. 30, n. 4