Battle past the hoards of school children in the British Museum ogling at the dried up body of a 5417 year old ginger man from Upper Egypt and you might just make it to a small nondescript case standing on the north-facing side of room 63. Here is where, in my humble opinion, the real treasures are to be found. 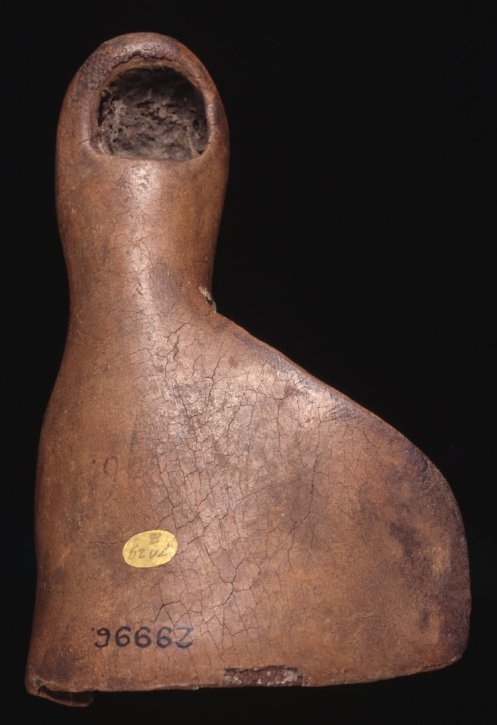 This fascinating object, nearly 12cm in length and 7cm in width, is made from a material known as Cartonnage, made by layering linen impregnated with animal glue and gesso, a plaster-like binding material: a sort of Ancient papier-mâché. The top layer shows feint cracks and the edges display signs of wear or ageing.

You are looking at the Grenville Chester Great Toe. But the name is misleading in two respects: first, Reverend Greville John Chester did not own the toe, nor was it made for him, he merely delivered it to the British Museum around 1881 after ‘wintering in Egypt’; and second, that ‘Great’ refers – sadly – only to the hallux or ‘big toe’, rather than the object’s well-deserved prestige. The Great Toe is a prosthesis, an artificial body part, understood to replace a missing one, as its derivation from the Greek ‘pros tithenai’, to place in addition, makes clear. 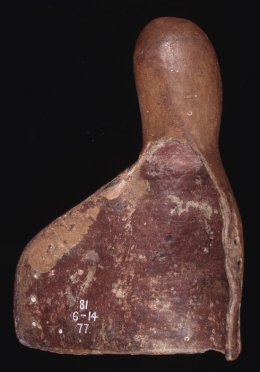 The shape resembles the big toe of a human right foot, and at one point would have been completed by an artificial toenail. In this photo of the reverse side you can just make out a number of holes around the edges through which the prosthesis could have been attached to something else, such as a sandal strap or a sock. The cartonnage has been covered with a layer of crushed dolomitic limestone and ochre colourant, creating the tan-coloured layer you can see in the picture, most likely to allow the prosthesis to blend in with the skin-colour of its wearer.

The Great Toe is not the only one of its kind. In 1998, 17 years after Reverend Grenville brought the Cartonnage toe to the British Museum, a team of German archaeologists excavating a site on the West Bank of the Nile, opposite Luxor, came across a badly damaged mummy from the 21st or 22nd Dynasty (1025-740 BC). Attached to the fragmented body of a middle-aged female was another prosthetic toe. The prosthesis, as you can see below, is very different from that in the British Museum. It’s made from three separate pieces of wood which are held together by seven leather laces. It appears that a piece of material would have stretched over the wooden plates to secure the ensemble together. 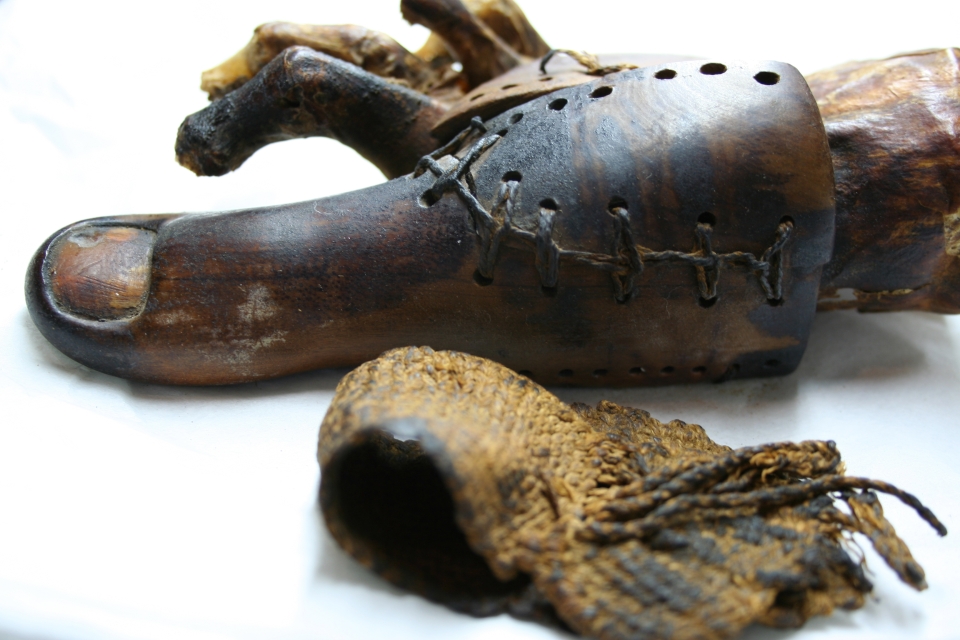 The most important question to ask in relation to these objects, in order that we might think about their interaction with the human body, is whether they were actually used. The answer is not as obvious as you might initially think, for reasons – I hope – that will shortly become clear.

The first place to look is for signs of wear, indications that an object has been used or fitted for an individual. The second thing to consider is the usability of these objects: how well they withstand the pressure of walking and sufficiently support the body. For the big toe, which supports 40% of the body’s weight whilst walking, this is especially important.

An X-ray of the mummy found near Luxor showed an intact layer of soft tissue and skin covering the site of amputation by the toe, suggesting it was amputated during the woman’s life. This would make it the oldest known intravital (during the life) limb prosthesis! But that doesn’t help us much when we come to the use of the object itself. On close examination, the wood shows signs of wear and recent research suggests that it was even refitted several times, with two distinct phases identified. The prosthesis displays a remarkable sophistication, with a hinge and three wooden plates, increasing movement and allowing it to mimic the flexing of the joint when walking. The carving is also particularly impressive, displaying convincing anatomy and representation of the human toe. Considering all these aspects together, we can confidently conclude that the prosthesis was used during the individual’s lifetime and, most likely, made to measure to her specific amputation site. The mummy has been identified as Tabaketenaut, the daughter of the wealthy priest for whom the tomb was made. Further guesses have been had as to what might have caused her to lose a toe, among them gangrene resulting from arteriosclerosis, but it’s impossible to know for sure.

Dr Jacqueline Finch, a researcher at the University of Manchester, took this investigation one step further and decided to test the two prosthetics. Replicas were made of both the cartonnage and wooden toes, in keeping with the materials, and two individuals with similar amputation sites tried out the two models. Both volunteers found the wooden prosthesis more comfortable, but both the prosthetic toes performed remarkably well.

The third toe in this series is the Albany Toe, named after the Albany Institute of History and Art in the United States. The Institute holds the mummy of Ankhefenmut, a priest from the temple of Mut at Karnak in Thebes during the 21st Dynasty (1085-945 BC, so similar dates to the mummy found near Luxor) who was reported to have died in 966 BC. He was probably between 55 and 65 years old when he died. After X-rays and CT scans, it was revealed that the mummy had an artificial toe on the right-foot. Based on density shown in the scan, it appears to be made of a ceramic-like material. Because the mummy remains wrapped, it is impossible to carry out investigations on the artificial toe and so it remains unclear whether it was worn in real life. The prosthesis, shown in the scan below, comprises of two distinct parts, highlighted by their different densities. The part which makes contact with the foot appears to be ceramic, but the part representing the toe appears to be made of wood coated with a layer of resin. 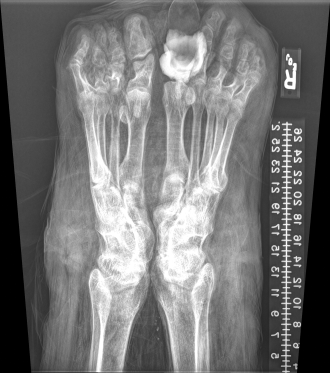 CT Scan of the foot reveals an artificial toe. The ceramic material is shown by the whiter part, with the feint outline of the wooden toe showing the second part. Albany Institute

Ceramic is hard, brittle and fragile, perhaps not the most obvious choice of material for a prosthesis required to assist walking, or holding body weight. In addition to this consideration, no attachment sites have been located on the prosthesis, suggesting that it was never used, nor was it intended to be used. Then why was it there?

Mummification was a process of embalming and wrapping the body in order to preserve it for the next world, fitting in with Ancient Egyptian ideas of resurrection. It was not just the soul which would be resurrected, but the body itself, and so the body’s preservation was crucial. The embalmers also appeared to have had a certain degree of creative license – bodies were shortened or lengthened, moulded in plaster and packed with anything from mud to sand. Sawdust was sometimes stuffed between the skin and muscles to define contours, plaits and curls were woven into the natural hair and false eyes, noses and even genitals were added. Spells on the inner sides of tombs speak of ‘reassembling’ and the ‘reuniting of the body’. This ideology of the completed body can also be seen in ’embalmer’s restorations’, where limbs were replaced by dummies – often made of linen and resin. The image below depicts the false arm of a mummy in the Gulbenkian Museum in Durham, UK. Whilst the shape of the object might seem like a convincing prosthesis, the structure is made entirely of cloth, with rolls of material inserted to represent fingers and thumb. The object has then been soaked in resin. This was not a useable prosthesis, but a dummy, intended to complete and preserve the body for the next resurrected world.

Although we are not able to see the Albany Toe, its is most likely that it fits in this category, created by embalmers to serve Ankhefenmut in the next life. Some toes were made for walking, but not this one. Sadly, we are unable to date the Grenville Chester Great Toe, as little information remains about its excavation. Jacqueline Finch has suggested it predates 600 BC based on the characteristics of the linen, but no further context is known. The prosthesis found near Luxor, however, is thought to be one of the oldest known prosthetic body parts, displaying a high level of sophistication around 1000 BC.