These prescriptions are all taken from the Kahun Gynaecological papyrus, edited and translated by F.L.Griffith in 1989. The Papyrus was found at El-Lahun in Northern Egypt and is currently housed in the Petrie Museum of Egyptian Archaeology, part of University College London. The papyrus is dated to circa 1800BC, the late Middle kingdom, making it the oldest known medical text in Egypt.

The text consists of gynaecological instructions and prescriptions for problems caused by the uterus, appearing to include cancer and prolapse among other recognisable ailments related to the uterus. Others are more far-fetched, such as pain in the eyes, teeth, feet and neck, and the inability to leave the bed.

The first seventeen prescriptions follow one form: (1) naming the symptoms, Treatment for a woman, (2) the diagnosis, Thou shalt say as to it, and (3) the prescription, Thou shalt do for it. Here are a few “Treatments for a woman”. Griffiths translation is rather outdated, and should be taken with a pinch of salt. His commentary is occasionally provided after the translation. 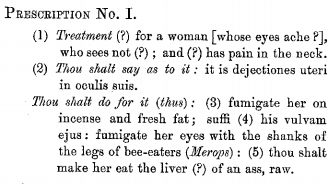 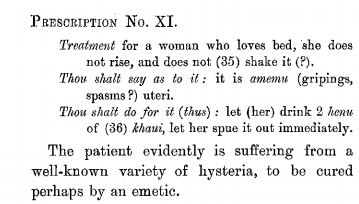